I have been working on trying to validate the first person in my own family history who arrived in this country as an immigrant. For the most part, learning when my relatives arrived has not been difficult. My paternal grandparents were from Lancashire, England, and became naturalized US citizens, thus making my Dad a first-generation American-born citizen. My maternal grandfather was two generations removed from immigrant status and he married a Canadian citizen who became my maternal grandmother.

It was when I started looking into my maternal grandfather's grandmother, my own Great Grandmother Burke, that things started getting interesting.

As I worked her family history backward, I was able to confirm - with the not insignificant help of an experienced genealogist who happens to be a cousin, a fact we discovered as I worked! - that my 8XGGF (eighth great-grandfather) is BENJAMIN BALCH, born, raised, and died in what is now known as Salem, Massachusetts, the Salem of witch trial fame, though he was not part of that. Also, having been born in 1629, he was not a passenger on the Mayflower, which arrived in 1620.

However, going backward from him is far more challenging. There are many well-researched books on the Great Migration of people, mostly from England, that arrived in that time period, but the records of folks prior to that are found in England.

That is what I am working on now. Here is what I think I know.
The challenging part is trying to validate information from those early-1600 records. What follows is most likely the baptismal record for John Balch, my 10XGGF. Because the penmanship is beautifully hand-done, and almost completely illegible to my eye, you can see how difficult it is to verify any bit of information from this record. Remember, we are talking about a record from the early 17th Century... 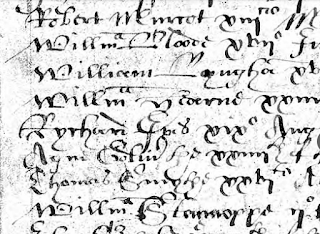 I have the entire record and it all looks like this. I think I can make out the word "Marriage" in one section on one page, but that is about all.

Methinks at some point I might have to pay a professional genealogist to help me validate the information! But hey! I have said before if it was easy, everyone would do it.

Onward and upward, space fans!
Posted by James at 3:25 PM